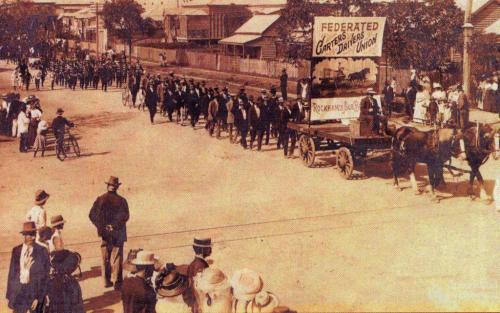 Inside the Tree of Knowledge Memorial, Barcaldine, 2009 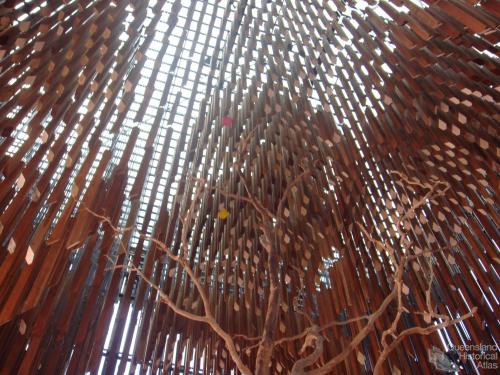 Inside the Tree of Knowledge Memorial, Barcaldine, 2009. Barcaldine – and the labour movement –suffered a symbolic blow in October 2006, with the poisoning death of the heritage-listed Tree of Knowledge. However, a spectacular architect-designed new Tree of Knowledge memorial using the site and the trunk of the original tree was opened in May 2009 by Premier Anna Bligh. It features an 18 metre high cube in which 4000 suspended timbers of varying length form the tree canopy. Collection of the Centre for the Government of Queensland

Copyright © Centre for the Government of Queensland, 2010

‘Fellow Unionists, an unprovoked and unjustifiable attack has been made upon the above shearers’ and labourers’ unions by the squatters’ associations.

The Great Shearers’ Strike of 1891 was a major confrontation between Queensland graziers and their shearing hands.

With the commencement of the Queensland gold-rushes in the 1860s, large numbers of Chinese miners and businesses arrived, and competition with Europeans led to rising tensions. 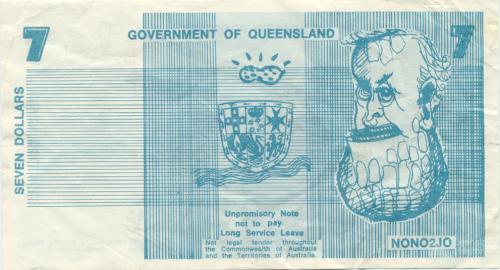 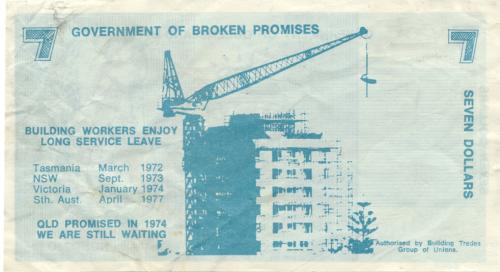 Seven dollar note, 1977. Unpromisory note not to pay long service leave. Joh Bjelke-Petersen clashed with many unions including the Building Union who had negotiated but not been awarded long service leave in 1977. Collection of the Fryer Library, University of Queensland.

“Organisation is for the purpose of developing the latent talents of the women. See how we live! Nothing uplifting about our lives is there? We’ve got no objective. We live and breed and die. Life isn’t meant to be like that. Life is meant for joy and expansion and objective living. I think it’s the job of women to rear a race of young who will live better lives than we live; who will be able to create a better world than we, their elders, have been able to create. It’s not a question of what women can do; it is what can’t they do?

Queensland has always been known for its extremes.