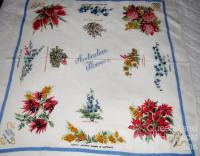 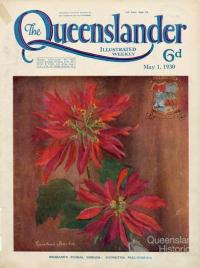 Souvenir wares can inform us about the social history of their times through the imagery with which people choose to represent themselves. The poinsettia is the floral emblem of the city of Brisbane. It was the first Australian capital city to adopt a floral emblem in 1930 and remains the only one so enflowered.

Remarkably, the poinsettia (Euphorbia pulcherrima) was selected as the floral emblem despite it not being native to Queensland or even Australia ‒ it is indigenous to the tropical areas of Mexico and Guatemala. As noted in Oakman’s Gardening in Queensland published in 1960, the poinsettia is a:

According to the Royal Botanic Gardens at Kew, UK, the common English name ‘poinsettia’ was chosen by historian and gardener William H. Prescott in the mid-nineteenth century to honour Joel Roberts Poinsett, the first United States agent in South America, who introduced the species to the United States in 1828 where the foliage became popular in Christmas displays. It became the focus of a major industry based in California where the plants were grown in glass houses. Reducing the length of exposure to daylight in controlled environments brings the poinsettia to bloom for the Antipodean Christmas.

The poinsettia had a history in Queensland from at least the early 1860s when a report in the Queensland Times, 20 June 1862, of a governor’s ball hosted by Governor Bowen revealed that Walter Hill, the Director of the Botanical Gardens provided ‘the scarlet foliage of the poincettia (sic)’ that dominated the display of native epiphytes and palms in the covered courtyard.

The poinsettia continued to be mentioned in gardening columns, and as decoration for social occasions for decades until the 1920s when it began a marked shift in status. In 1924 the Queensland State Parliament passed the City of Brisbane Act to amalgamate 20 local authorities and join boards into a single local government area. The Brisbane City Council was established on 1 October 1925 with William Jolly as the first Lord Mayor. Brisbane City Hall, built as a symbol of this unification was officially opened on 8 April 1930. However, only a few weeks earlier a meeting was convened by the Horticultural Society of Queensland to adopt a floral emblem for the city. Nominations were received for suitable flowering plants and ten offered for a ballot of Brisbane’s citizens through the Brisbane Courier on 14 March 1930: bauhinia, bougainvillea, callistemon, gerbera, hibiscus, jacaranda, lagerstroemia, poinciana, poinsettia and Sterculia acerifolia (flame tree).  The principles of selection were outlined in the newspaper:

It should be easily propagated, and, therefore, cheap.
It should lend itself to illustration and reproduction.
It should be small enough to be grown in a small allotment.
It should be striking and arresting, showy.
It should be hardy and be able to withstand the vagaries of the weather and climate.
It would be of advantage if it was stock repellent.
It would be an advantage to have a thornless plant.
It is of much importance to select a plant that excels itself here.
A plant that flowers during the tourist season might receive extra consideration.

Only two of the plants selected were Australian natives (and not necessarily Queensland natives) but there was little parochial embarrassment at the time as:

Exotics, that is plants other than are native to the soil, should not be debarred as horticulture, like music, literature, art, and science, is universal. Are we not exotics ourselves, and do we not consider ourselves a little better than the aborigines?

E. W. Bick, curator of the Brisbane Botanic Gardens, provided a brief descriptive list to assist the voter’s deliberations in the Sunday Mail (Brisbane) on 30 March 1930. Of the poinsettia he stated:

This is a native of Mexico, first cultivated in 1854, botanically known as Euphorbia pulcherrima and Poinsettia pulcherrima. The chief beauty of the Poinsettia lies in the large vermillion bracta that surround the small, greenish-yellow flowers. The plant is easy of propagation, and thrives remarkably well about Brisbane; in fact world-wide travellers have declared that better poinsettias may be seen in Brisbane from June until August, than are grown in their native country.

The ballot closed on 2 April 1930 and the results showed a narrow preference for the poinsettia (1294 votes) over the bougainvillea (1275). The poinsettia was formally adopted as the floral symbol of Brisbane at a ceremony at City Hall on 16 June 1930. By then the weekly magazine ‘The Queenslander’ had already commissioned prominent Brisbane artist Caroline Barker to produce a painting of the poinsettia for its front cover on 1 May 1930. Curiously only three floral paintings identified as poinsettia were exhibited in the annual exhibitions of the Royal Queensland Art Society in the 1930s and Vida Lahey, Queensland’s most prominent floral painter, produced not a one.

Poinsettias had long embellished the dining-rooms and lounges of both public and private assemblies during winter (and continued to do so) but the promotion of the poinsettia had begun several years before in 1928 as an article in the Sunday Mail (Brisbane) 3 June 1928, headed ‘Brisbane, City of Poinsettia’ recorded the words of an American visitor who had ‘expressed great admiration for the wonderful poinsettia, growing here as it does in no other part of the world. He suggested that Brisbane, for publicity sake, be named the Poinsettia city, as witness the many other cities of the world famed for flowers.’ The Brisbane poet Emily H. Bulcock published two poems celebrating the poinsettia in the Brisbane Courier in 1929 ‘A Queensland Winter Morning’ and ‘Brisbane Poinsettias’ and followed up with ‘Brisbane-Poinsettia City’ just after voting closed, published on 5 April 1930:

She shall be called Poinsettia City;
For her red flags wave the winter through;
Emblem of hope for a brave, young city:
Breathing of spring and a world made new.
Who could be joyless or utterly hopeless
When rioting colour warms and glows,
Drowning life's grey in a sea of scarlet?
And ever the conquering torrent grows.
Here is a fire of flaming splendour
That all may share in the winter long;
Mean little cottage or towering mansion
Wave your banners! Sing Hope's brave song!
Regally clothe her―our beautiful Brisbane
In royal garments of richest hue;
Let all take part on the quest of beauty
Till her fame goes forth―the wide earth through.

The prominent stained glass artist William Bustard had also clearly made his decision as poinsettia was included in the stained glass panels over the side vestibules which were installed by the City Hall’s official opening. Poinsettias ‘branded’ the city. The Brisbane Courier 16 May 1930, reported that the Cosy Dell café promised a French-inspired poinsettia menu and the declaration of Poinsettia Day, and elsewhere poinsettia costumes featured in fancy-dress balls, Poinsettia Fairs were held by various church groups and the Poinsettia Social Club and Poinsettia Pastime Club were formed.

The Brisbane Rugby Football League also took part in this general enthusiasm for the flower. On 28 March 1932 the Brisbane Courier reported:

Brisbane has taken kindly to its beautiful floral emblem, the poinsettia. On every hand the scarlet spray meets the eye – in souvenirs of the city, in paintings, and in needle and poker work. Some Brisbane organisations have expressed their civic pride by even having the poinsettia printed in colours on the outer covers of their annual reports. Its latest introduction is in the new jerseys of the Brisbane Rugby League team. The team was applauded when, at the Woolloongabba Ground on Saturday, it took the field against Toowoomba wearing the recently-adopted colours- white, with scapular stripes of red, and a sprig of poinsettia on the left breast.

In 1934 the English composer, traveller and author noted in his best-selling Australian travel book Cobbers:

I am in complete agreement with Brisbane about the beauty of the poinsettia.   It may be an immigrant, but it has made itself wonderfully at home.  This is not surprising when it finds a soil rich enough to let anyone grow a banana-tree in his back garden: rich enough for arum lilies to be looked upon as weeds.  The crotons and the jacaranda, the bougainvillia and the poinceana have all stolen their colours from tropical sunsets, but none has thieved so successfully as the poinsettia.  Its flaming scarlet splendour makes England seem far away.

In the commercial field hand-decorated handbags were available while Brisbane soap manufacturers Campbells produced presentation boxes of poinsettia soap and cologne. The biscuit maker Webster’s celebrated the occasion by produced presentation tins depicting the newly built Brisbane City Hall on one side and the new city emblem on the other.

After the second world war, the advent of cheap china from Japan flooded the commercial market with poinsettia decorated china, including ones depicting Story Bridge opened in 1940.  Souvenir wares linking the City Hall and the poinsettia were produced on tea towels, stickers, posters, postcards and other ephemera including an envelope commemorating Queensland’s sesqui-centenary in 1959. However, images of the poinsettia that became more broadly linked to the city of Brisbane itself continued to be produced in maps and postcards. But the linking was becoming less specific until with the opening of the Queensland Art Gallery as the first stage of the Cultural Centre, Southbank in 1982, when the poinsettia had become one of the accepted icons of the city.

On 5 April 2012 the highly regarded projection artist, Ian de Gruchy, was commissioned to create images Connecting Brisbane for the William Jolly Bridge Creative Lighting Project. The bridge itself was completed in 1932 and in the overlaying images of the poinsettia de Gruchy drew inspiration from the history of the bridge, the local area and Brisbane.

Although the poinsettia is an exotic plant to Queensland, its connection to Brisbane has extended over eighty years. Perhaps we should reassert its status and celebrate Brisbane’s winter sunshine by planting masses of the increasingly diverse and colourful poinsettia cultivars in public spaces so that Brisbane truly becomes ‘Poinsettia City’.

Poinsettia: a beautiful flower of California 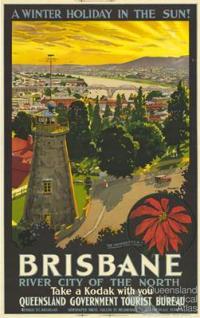 Brisbane: river city of the north 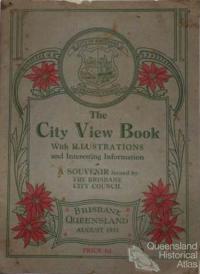 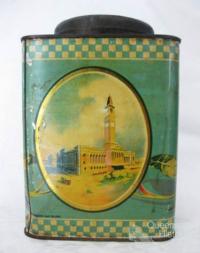 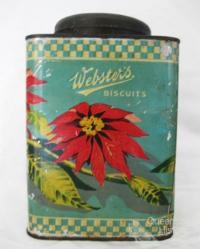 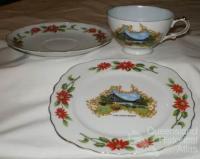 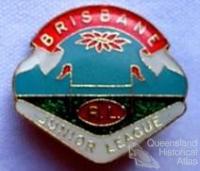 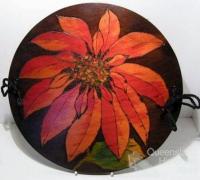