A notable feature of the early Chinese settlement in Queensland, as in other places where overseas Chinese societies developed, was a communal pattern of settlement. Where they could, Chinese immigrants banded together for protection and mutual support within the new and sometimes hostile environment of the host country or colony. This was first observed on the goldfields where newly arrived miners organised themselves into camps separate from the European population and also, at times, from other Chinese who were not from the same district in China. Most of these camps were transient, the occupants moving from place-to-place in pursuit of new gold-bearing areas as old ones were mined out. At some locations, though, groups of permanent dwellings, stores and nearby market gardens were established, and these became popularly known as 'Chinatowns'.

While the segregating practices and sometimes hostile attitudes of the European community at times played a part in how and why Chinatowns developed, they were also a reflection of the cooperative spirit and strong self-organisation of Chinese immigrant societies. Indeed, Chinatowns played a critical role in early Chinese communities, consisting predominantly of men who immigrated to Queensland in the hope of making enough money to better the lives of their relatives back in China. These men were mostly unmarried or had left their wives at home, and moved about the countryside often as they sought work opportunities. Apart from mining, other professions the Chinese turned to included gardening, labouring, land-clearing, fishing and shop-keeping. Few of these professions were well paid or easy, and some required working in harsh or remote places; the immigrant’s existence, therefore, could be a hard, insecure and lonely one. Chinatowns stood as fixed hubs within this landscape of toil and transience, and were tailored to meet the particular needs of immigrant population.

Economically, they served as centres for the marketing of goods and produce and the provision of essential services such as blacksmiths, butchers, builders, carpenters, doctors and herbalists. Another key role was acting as dormitories for the transient population. However, they also had an important social and psychological dimension. They were, in a sense, refuges against the difficulties of immigrant life. Not only could they offer some protection against European discrimination, by shielding their activities from the eyes of authorities and providing opportunities for economic autonomy, but they also catered for the Chinese desire to retain their cultural practices, religion and familiar ways of life. In particular, a communal lifestyle was a prominent feature, and this stemmed from the Chinese immigrant’s ethos of maintaining kinship ties, assisting fellow immigrants and pooling resources. Clan groups and various mutual aid societies, acting like extended families, were also an integral aspect of life. Chinatowns also brought together a range of activities and entertainments that provided comfort, enjoyment and, at times, a sense of escape, to the immigrant populace. Hence, while in some instances the term ‘Chinatown’ was loosely applied by local European people to any collection of Chinese residences or market gardens in the area, a true, fully developed Chinatown had some characteristic features. These features usually included boarding houses, stores, eateries, gambling and opium shops, clubhouses, and one or more temples, although some of these functions could merge within individual establishments. While a Chinatown always possessed a core of relatively permanent residents, it served, and was visited by, a much greater population distributed across the local district.

The size and location of Chinatowns varied considerably. Some, such as the Atherton and Croydon Chinatowns, were separate or semi-separate settlements at the outskirts of European centres, while others were enclaves within the townships, as was the case with the Cairns, Cooktown and Brisbane Chinatowns. Not every Chinese community in Queensland established a Chinatown, however, as a relatively large population was needed to sustain it, and so those communities that were very small or highly scattered developed differently.

Although the products of community response to the conditions of immigrant life, Chinatowns were not always models of social harmony. Rivalry between different Chinese factions existed, and these could result in the building of separate quarters, clubhouses and temples within a Chinatown. On rare occasions open conflict arose, as happened in Atherton in 1911 when a riot erupted between two rival groups.

The European view of Chinatowns was often negative. They were regarded as vice-ridden ghettoes or symbols of the otherness of the Chinese, as well as their perceived inability or disinterest in integrating with wider society. One Chinatown was described in the Queensland Supplement of 20 May 1882 thus:

It consists of small, dilapidated, and dirty tenements, huddled together without any attempt at uniformity, and without any regard to sanitary regulations.

In reality, Government inspectors found that most Chinatowns, although often crowded, were neat and clean given the basic standards of rubbish disposal and sanitation of the day. One visitor to Cooktown’s Chinatown in 1877, for instance, observed that:

The shops are clean, high and airy: the wooden barnlike structures of houses being divided into a front shop fitted with shelves and counters and a backroom filled with sacks of rice.

Indeed, conditions in Chinatowns were not much different from those experienced by working class Europeans. The tendency towards basic, small dwellings and multiple occupancy was the result of the modest incomes of most Chinese immigrants, as well as their close social organisation and desire to save their earnings.

The social isolation of Chinatowns can also be questioned. Contemporary research indicates they could be cosmopolitan places visited or inhabited by people of various ethnic backgrounds, including Europeans, Pacific Islanders and Southeast Asians. The stores were particularly appealing to European women, who were courted in exotic surrounds by Chinese merchants showing off a wide range of silk, teas and fancy goods, while the fresh fruit and vegetables available at the Chinese grocer, in a era when almost all market gardening lay in Chinese hands, were essential for the health of every household. Chinese gambling and opium shops were also popular among some segments of the wider population. Less well documented, but also of significance, was the presence of Aboriginal people within Chinese quarters. Having been displaced from their traditional lands by the process of British colonisation, many gained employment and provisions from the Chinese. Over time, as Chinese men established families with non-Chinese women, the children of these unions added to the social diversity of Chinatowns.

One of the earliest and most important of Queensland’s Chinatowns was established in Cooktown, which was founded in 1873-1874 to serve as the port for the Palmer River Goldfield in Cape York. Cooktown’s Chinatown was the gateway for the approximately 15,000 Chinese who participated in the goldrush. It started life as a camping ground for miners but quickly grew into a strip of large general stores and import/export firms in the town’s main street (Charlotte Street), and a back street (Adelaide Street) containing a temple and various small businesses, accommodation houses and a small number of boat builders and blacksmiths. After the Palmer River gold waned, much of the Chinese populace either returned to China or migrated elsewhere within Queensland. It was from this period that the development of other Chinatowns was stimulated, such as in Cairns in the late 1870s, and Atherton and Croydon in the 1880s. A sizeable Chinese community also developed in Brisbane in the 1880s. The main business district was in Albert Street and Fortitude Valley, with market gardens distributed in outer areas, especially on the river flats of Breakfast Creek and Eagle Farm.

By the early to mid-twentieth century Chinatowns in Queensland had either been abandoned or were in decline. Their existence was tied to the fortunes of Queensland’s Chinese communities, and when these were eroded by the introduction of severely restrictive anti-Chinese Government measures, the vitality of the early Chinatowns ceased. It was not until Chinese immigration resumed after the lifting of the White Australia Policy in the 1970s that Queensland’s Chinese community entered a resurgence. In 1987 the Chinatown Mall was opened in Brisbane’s Fortitude Valley, mimicking Sydney and Melbourne. An $8 million redevelopment was opened in 2010. This renewed Chinatown precinct is in many respects very different from those of former times, for it reflects the different nature of Queensland’s modern Chinese Australian community, which is more educated, affluent and diverse than that of the nineteenth century, and is no-longer predominantly male. Furthermore, the community is distributed over various locales, particularly the Brisbane suburb of Sunnybank. While Chinatown does act is a hub for commercial and cultural activities, it is not the sole or premier centre. Consequently, there is no temple or strong residential focus, and a large part of it is a precinct of shops and restaurants popular with Chinese and non-Chinese alike. 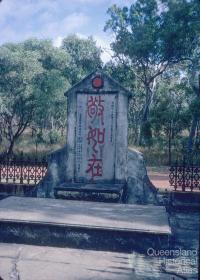 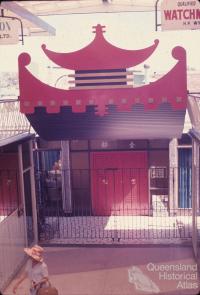