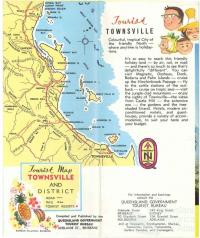 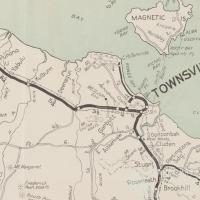 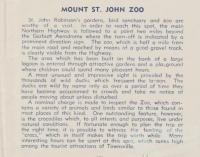 The Mount St John Zoo was a popular attraction in the Townsville region in the 1930s-40s, widely acclaimed as the largest privately-owned zoological garden in Australia. It began by accident, as an informal bird sanctuary centred on a naturally-occurring lagoon on a cattle property just north of Townsville. Interested in the flocks of birds that congregated on his lagoon, St John Robinson built a small dam to enlarge the water area, and by 1925 his lagoons and its adjoining swamps were listed as a sanctuary by national conservation groups. Robinson was an occasional crocodile shooter and began to capture live animals while working as a publican and canefarmer in Halifax. He transported crocodiles from the Halifax hotel, a little over 100 km away, to the lagoon at Mount St John in the late 1920s. In 1932 Robinson and his sons successfully applied to the Townsville City Council to register the area as a zoo. In the 1930s the zoo expanded rapidly both by trapping local animals, especially crocodiles from the nearby Bohle River, and through trading with larger zoos in the southern cities. By the 1950s it was in decline and in 1955 it was purchased by the Wirth Family Circus and operated as winter quarters for their touring menagerie, finally closing in 1969.

By the time he opened his zoo to the public, John Edmund Robinson had become St John Robinson, and the property, known during the nineteenth century variously as Mount John, Mount Cavour and Jimmy’s Lookout, was firmly established as Mount St John. Robinson’s family was used to reinventing itself: his father had anglicised his surname of Rubenstein by the time of his arrival in Australia. His mother Catherine who had arrived in Townsville in 1865 was a publican and prominent early resident of Townsville, claiming the honour of being ‘the first European lady’ to set foot on Magnetic Island. St John Robinson had served in the Boer War and was also well known as a buckjumping champion. Robinson had experimented with animal exhibition before opening his zoo. The Robinsons kept a number of crocodiles and snakes for display behind the Halifax Hotel, and St John’s brother Sid later became a commercial crocodile hunter and guide, escorting tourists on boat trips through crocodile-infested waters in an early forerunner of Queensland’s eco-tourism industry.

Robinson exploited his access to tropical species to connect his zoo with larger institutions elsewhere. In October 1932, even before officially opening his zoo, he swapped a stuffed crocodile for a pair of white swans from Taronga Zoological Park in Sydney. In 1934 he sent Taronga a live sixteen-foot crocodile, captured in the Bohle River, and followed it with other live crocodiles sent to Taronga and the Melbourne Zoo during the 1930s and 1940s. In return he received a steady stream of animals including water fowl, ostriches, emus, antelope, monkeys, a giant tortoise, a zebra and an American alligator, pedantically referred to as the ‘real’ alligator to distinguish it from the Australian saurians.

As well as dealing with other Australian zoos, Robinson participated in the international exotic animal trade. In 1937 he and his wife returned from a trip through South-East Asia with an array of exotic birds and monkeys, as well as two bears and a black panther, acquired in exchange for Australian fauna. The bears remained in Brisbane after a quarantine period, and, despite attempted intervention by the local member of the House of Representatives, the panther was refused quarantine approval in both Brisbane and Sydney, before finally being sent to the Melbourne Zoo. These acquisitions highlight the paradoxical nature of the Mount St John Zoo, which was simultaneously praised in the local and southern press as a pioneering sanctuary and breeding ground for animals, and as a wonderland of exotic species.

Robinson’s interest extended to animals endemic to the north. His collection included cassowaries, tree kangaroos and quolls, purchased directly from trappers and other private collectors. Robinson found no tension between the ‘showman’ side of the zoo and his instincts as a natural historian, combining the two in a manner similar to the more celebrated career of the ‘Crocodile Hunter’ Steve Irwin half a century later. While crowd-pleasing crocodile-feeding stunts were a major drawcard for the public, and featured heavily in advertising for the zoo, Robinson also closely observed and recorded animal behaviour at the zoo. In particular he made detailed observations of crocodile breeding, nest-building and hatching behaviour. Between 1943 and 1948 he not only documented but experimented with these phenomena, crossing the lagoon in a boat and fending off a protective mother crocodile (watched, of course, by a paying crowd and a ‘Kodak movie man’), and later isolating completed nests to observe the hatching and growth of the young. These intimate details of crocodile behaviour were still mysterious at the time, due to the difficulty of making observations of wild animals.

Icon of the north

Until the end of the 1950s the zoo featured heavily in tourist booklets produced by the City Council and the Queensland Government Tourist Bureau and acted as a focal point for local events. In 1933 Robinson staged a rodeo which included a bullfight. The bullfight was reportedly the first held in Australia, though any audience members baying for blood were sadly disappointed. Despite the tame, theatrical nature of the affair, the promotion of bullfighting caused a wave of outrage in the Brisbane and interstate press, with luridly exaggerated accounts prompting protests from, among others, the Victorian Society for the Protection of Animals. Whether the zoo and its accompanying events, mostly animal-focused, were humane was an ongoing topic of debate, and profiles of the zoo as a tourist destination alternated between praise for the exotic attractions and concern for the welfare of the animals exhibited.

A sense of a distinct northern identity is identifiable in the reactions to this criticism, as many locals sought to distance Townsville and its residents from southern Queenslanders and other Australians by emphasising the uniqueness of northern wildlife and an attitude of self-reliance, independence and understanding of the natural environment. Robinson himself was an active promoter of local causes, donating the profits from his rodeos to various charities and arguing in favour of northern development and the recognition of a resourceful, utilitarian northern type. The rodeos at Mount St John became an exportable image of North Queensland, featuring displays of skilled horse riding, aerial acrobatics and in one notable incident in 1938, the rescue of a wayward young parachutist from the crocodile-infested lagoon. Several were filmed and viewed as far away as London, contributing to a self-fashioned image of North Queenslanders as adventurous and intuitively skilled animal handlers.

Decline of the zoo

While a key feature of Townsville’s tourism industry during the mid-twentieth century, the zoo was never publicly funded or controlled, and a dispute over the impact of flooding from Robinson’s homemade dam on neighbouring properties and roadways carried on for several decades. After stalled negotiations over flood mitigation strategies, the dam was controversially blown up by the State Government in 1952 to prevent further damage and disruption to the roadway, destroying the nests and habitat of thousands of native birds. Although the zoo continued to operate until 1969, the death of an employee after a crocodile attack in 1953 and the subsequent sale and dispersal of many of the larger crocodiles signalled a steep decline in the zoo’s fortunes, and the destruction of the dam made supplying water to the animals increasingly difficult. Phillip Wirth, of Wirth’s Circus, took control of the zoo in 1955, introducing more exotic circus animals such as lions and camels, which ensured continued tourist attention, but the element of conservation and semi-scientific observation of native animals was no longer present. In 1969 Wirth’s widow sold the animals to the Gold Coast Zoo.

The Mount St John Zoo was a highly personalised project, inseparable from the public image of its creator, which was itself a product of an idealised conception of the rugged individualist ‘bushman’. For several decades the zoo provided a compelling illustration of the natural and social life of Townsville and North Queensland to southern Australians and the wider world. Robinson’s enterprise hovered uneasily between tourist spectacle and zoological science, contributing to a rurally-focused Queensland identity that persists into the urbanised twenty-first century. 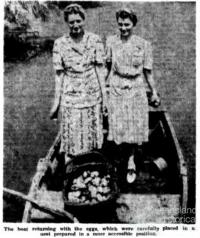 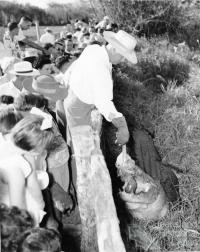