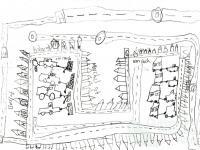 Girl A, freehand map of Cherbourg 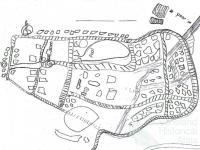 Boy A, freehand map of Cherbourg 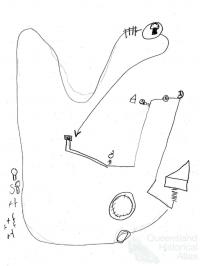 Girl B, freehand map of Cherbourg 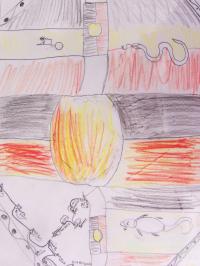 Boy B, freehand map of Cherbourg
By:
Angela Kreutz

Childhood is a time of great exploration. This benefits cognitive, social and emotional development in children and is critical for developing environmental knowledge. The way in which children explore and move through the environment, however, is changing. In mainstream middleclass urban and suburban neighbourhoods across the globe children are exploring less, but in the rural Queensland Aboriginal community of Cherbourg children are exploring more. When today’s children’s grandparents were growing up in Cherbourg their movement through the community was far more restricted. This has much to do with the history and current situation of this Aboriginal community.

Cherbourg is an Aboriginal community located in South-East Queensland. It was established in the early twentieth century by the Queensland Government under the Aboriginal Protection and Restriction of the Sale of Opium Act 1897 (Qld). This saw Aboriginal people deported against their free will to Cherbourg from different parts of Queensland. Once in the settlement their activities were tightly controlled by government officials who had the power to control, punish and remove children from their families and place them in the settlement’s government-run dormitory. Despite the fact that children on the settlement grounds were less confined than those in the dormitory, they still needed to abide by settlement rules and regulations. Children have always made up a large proportion of the community, and today, children continue to represent close to half the population. This is a community that is strongly characterised by its children who roam the streets and beyond. Yet something in the way children move about and explore has changed.

The childhood memories for Cherbourg’s older residents come flooding back as they sit on the front porch and watch their grandchildren play about the community. These memories provide an important insight into how children once explored their local environment. Back then, there were a number of restrictions that prevented children from being as mobile as the children of today. Children’s movement was spatially and temporally confined by government rules and regulations. Local government officials forbade Aboriginal people to leave the community without the permission and a permit from the office clerk and within the community children’s whereabouts was controlled with harsh punishment. Government officials patrolled the community streets to ensure children were both at school, at work and at home after 5pm each day. Children were forbidden to access the administrative district, the orchards and farmlands as one grandmother recalls, ‘We could get in trouble if we were around certain parts like the supervisors area. This was only for the white people. We used to sneak in sometimes anyway.’

Residents remember being confined to tribal and family group territories in the community. This constellation was common among many larger ex-Governement communities such as Cherbourg, which were not homogenous societies, but consisted of many different tribal groups speaking different languages, and practicing diverse customs. In time the settlement population began to relocate from more peripheral camping grounds into the centre of the settlement. Nevertheless, until the late 1960s there continued to be community districts reflective of tribal groupings with these districts and streets reflecting children’s territories. Children would form their own street gangs, including the Bell Street, Marshall Street, Beattie Street, Top End Broadway, and Barber Street mobs. Here it was safe to move about, explore, play and build cubby houses. Each territory was defended against intruders as one grandfather remembers, ‘We were not allowed to play in other areas. If we did we would get into a fight.’ Two shared common areas – Barambah Creek and the Corroboree Ground – were an exception to this rule.

Many residents who grew up in Cherbourg reflected back upon their own lives and described how, in days gone by, they would go on family excursions learning about flora, fauna and orientation. These excursions taught children where to go and not to go. Learning about sacred places was an important part of children’s education and children learned to avoid these places in order to steer clear of spirits and ghosts. Most children were aware of a sacred place down by Barambah Creek known as The Rocks and the stories of the Mundagarra, Tall Man, Black Dog, Jack the Lantern and the Jundagees. In order to stay safe, children would play close to the community among places they named the Island, Tarzan Valley and Naked City.

Nowadays children continue to follow their instincts outdoors exploring great distances and discovering the landscape. Parental fears, technological influences and a precedence of structured over unstructured activities have not limited children’s opportunities for independent exploration and free play in Cherbourg to the same degree as they have done in western and more affluent societies. Rather, children growing up in Cherbourg today explore greater distances than their grandparents could ever have imagined. The absence of rules and regulations, the gradual erosion of traditional cultural identity systems and fewer cultural excursions and teachings on sacred places has meant that most children no longer feel restricted in terms of how far or for how long they can explore their environment.

Moreover, children now have different ways of getting around. Pushbikes, quad bikes and motorbikes transport children well beyond the community setting into the distant bush land and to nearby country towns. One grandmother voiced her concern about children’s whereabouts, ‘It’s difficult to keep track of them. You just hope they’re not getting into trouble.’ The children’s free-hand maps of Cherbourg not only exemplify the great distances children travel, but also reveal the great level of environmental knowledge they have gained through these explorations. They are acutely aware of the community’s layout and the location of more distant places such as the Bjelke Petersen Dam, the Emu Farm, the Junction, the Sand Quarry and the Ranger’s Hut. Children’s environmental knowledge is created out of a balance of what is known and what is still to be discovered. What happens, however, when there is not much more to be discovered?

With fewer guidelines, limits and boundaries imposed on children’s mobility and fewer local environment narratives about spiritual and mythical places circulating around the community, children today are free to explore anywhere and everywhere. Moreover, with fewer family excursions taking place, children have begun to perceive less opportunity for activity and play in their local environment, such as the opportunity to hunt and gather food. It seems that Cherbourg has become less challenging and has lost some of its layers of meaning. Subsequently, it is less interesting and intriguing for many of the children living there. Once children have explored the limits of what they can independently perceive in the environment they retreat back into the community and are seen walking and roaming the streets. These children are often under-stimulated, frustrated and complain of feeling ‘slack’ (bored). They are struggling to independently find new challenging discoveries.

In today’s urbanised world with many parental fears, children’s freedom to independently move around their local environment is often considered positive by child developmental psychologists. In light of this, children’s mobility patterns in Cherbourg are generally good for children’s development. However, there are two sides to the story: the positive story of children’s exploration freedom and the negative story of abandoned sociocultural practices, rules and guidelines. Children are often fascinated with danger and taking risks and testing personal boundaries is an important aspect of children’s development. It appears there is a fine line between freedom without and within set boundaries. The freedom children experience today is symbolic of the fact that the community has lost a significant layer of cultural meaning and in this way the surrounding environment has become somewhat over-discovered to the children of Cherbourg.

Angela Kreutz, ‘Munu gukooreree: Aboriginal children's use and experience of space and place in Cherbourg’, Doctorate of Philosophy, University of Queensland, Brisbane, 2012 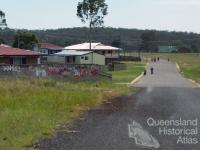 Walking the streets of Cherbourg, 2010 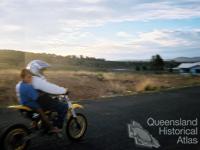 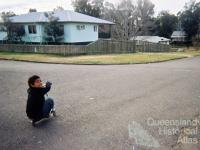 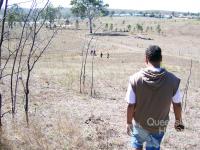