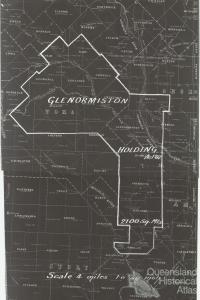 When pituri was traded throughout Central Australia it was carried in beautiful bags like this one. This bag was collected by J.A. Coghlan, the manager of Glenormiston station on the Georgina River, which was very close to the main pituri gathering areas west of the Mulligan River. Looking at the bag pictured it seems stagnant. Museum photographs reproduce stark realities, a thing made of fibre on a blue background. But things tell stories, and the correspondence held at the Queensland Museum offers some insights.

Coghlan was a keen collector of both cultural and natural specimens. In some of his earliest correspondence to Charles de Vis, the Director of the Queensland  Museum, written on 15 December 1891, Coghlan had just donated a lizard, but noted  his curiosity with the Aborigines around Glenormiston, ‘I have been amongst a great many natives in different parts of the Colonies but I think these here are the most interesting’. He goes on to note in the same letter, ‘Another thing they are also very clever at and that is preparing and making fibre’. After years of correspondence, in early 1896 a skin of the rabbit bandicoot which Coghlan had been trying to capture for the past six years was finally sent to the museum, the Director was very thankful for many of the donations, but Coghlan merely ended his 6 October letter of 1896 by noting the impulse inside all collectors, ‘I take pleasure in all this’.

At the end of 1896 Coghlan offers up his collection of ‘aboriginal curios’ that he had accumulated at the Glenormiston homestead for sale to the museum for £15.10.00. By 12 May 1897 the museum had acquired this major collection of Aboriginal artefacts from Western Queensland,  including three pituri bags, of which this object was one. This semi lunar shaped bag is of tightly woven  native fibre coloured in bands of natural reds, browns, greys and blues (it is 435 mm long, 200 mm wide). The top of the bag is loosely woven with a tassel of human hair tied at the edge of the opening. When it was donated there were still fragments of pituri in the bag.

The Coghlan correspondence also gives a rare insight into just how important pituri was for Aboriginal trade in central Australia. Coghlan writes in an undated letter from 1893, ‘The Blacks of Boulia and Toko have good spears and Boomerangs which they barter for Pitcheri with the Mulligan blacks...At present there is a boycott on the Mulligan blacks refusing to sell Pitcheri ...with the Smoky Creek blacks.’  The latter was a dispute over marriage arrangements. And much earlier, in the 15 December 1891 letter,  the significance of the pituri trade was also noted, ‘The blacks here are great traders doing trade for a long distance exchanging pitcheri for coolimans and other things. And not long ago they boycotted the Boulia blacks for some bad conduct and refused to let them have pitcheri and as the blacks here have all the pitcheri the Boulians had to give in and be good’.

What we can see in this bag is a vibrant network of trade where ownership of pituri structured relationships of power. And we can also see a station manager and collector who observed Aboriginal culture and imagined the only way to conserve it was to collect it. 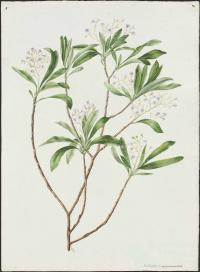