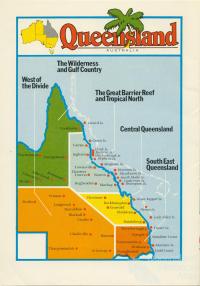 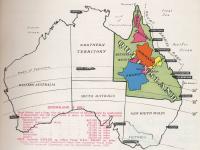 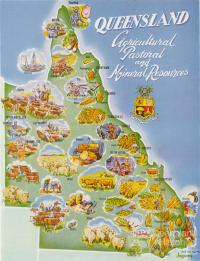 Queensland, twice the size of New South Wales and eight times the size of Victoria. That’s how the recently established Government Tourist Bureau promoted the state on postcards in 1912. In 2008 Prime Minister Kevin Rudd couldn’t resist pointing out to American President George Bush that Queensland was bigger than Texas. Few in Queensland ever mention that Western Australia is bigger still.

When Captain Arthur Phillip claimed the entire continent for the British Crown in 1788, the rights to country of the Indigenous occupants were not recognised. The individual colonies of Australia became embroiled in a fierce competition to attract migrants, and later investment and tourists.

Over time this question of how to market Queensland has been asked by emigration agents, tourist bureaux, governments, premiers, airlines, breweries, publishers, authors, artists, mining companies, advertising agencies and real estate agents. The response has in turn shaped the very nature of Queensland and what it means to be called a Queenslander – sometimes unflatteringly.

Paradise of the willing

Emigration agents pushed the new colony – the ‘last colony’ of Australia and named reportedly by Queen Victoria with her own royal title – to potential emigrants from Britain. These emigrants needed to know some very basic information about Queensland – where was it, how long did it take to get there and what was the weather like?  An emigration map produced in Edinburgh in 1865 answered all these questions – 17,500 miles away, with an average sailing time of 94 days, and ‘warm but healthy, resembling Madeira’. They arrived at a rate of 300 per week.

The opportunities and potential of the colony lured the emigrants. And after gold was discovered in the new colony the art of luring became easier. In the latter half of the nineteenth century huge pastoral leases were taken up, port towns flourished and substantial settlements marked the major mining sites, from Gympie to Charters Towers and the Palmer River. The most optimistic boosters wanted to attract a population of 50 million to the new colony. As well as maps explaining how to get there, emigrants were enticed with handbooks and pamphlets offering advice.

Promotion began on the world stage. The government took advantage of exposing Queensland at International Expositions in Paris in 1878, the 1880 International Exposition in Melbourne and in a range of other international circles including Germany. No claim was too extravagant. The Commercial Travellers’ magazine Australia To-Day proclaimed Queensland in 1911 as the ‘Cornucopia of the Commonwealth ‘, with  ‘Elbow Room for Millions’, and in 1913 as a ‘Land of Plenty’, ideal for  the ‘Homemaker, the Investor and the Tourist’.

Originally dubbed the ‘Queen State’, the climate and scenery of Queensland became the biggest drawcard  of all – ‘Radiant Summer Days, Brilliant Sunlit Waters, Health Opportunity Freedom’, ‘Queensland – noted for its Sugar, Cattle, Gold and Superb Coastal Scenery’. Promotional booklets took on a more golden hue – Glimpses of Sunny Queensland and The Land of Sunshine. The Queensland Intelligence and Tourist Bureau looked north with the opening of new shipping lines and railways to Cairns from the 1920s. With the opening of the ‘Sunshine Route’ railway the paradise of the worker quickly became the paradise of the tourist. North Queensland and in particular Cairns offered ‘captured sunshine’, whether they came by boat or train. Tourists could then visit the romantic isles of the Great Barrier Reef. The Queensland Intelligence and Tourist Bureau commissioned a range of posters by Eileen Mayo, Percy Trompf and James Northfield, all aimed at attracting holiday makers from the southern states.

Battle for the beach

The Great Barrier Reef, while romantic in its own right, prevents mainland beaches from having much surf. First established on Sydney beaches in the early 1900s, the surf lifesaving movement is still headquartered there. Bondi became the symbol of the Australian surf beach, with only modest competition from Victoria and Western Australia. Bayside cities had to find other ways to market themselves.  Melbourne emphasised its trams and stately buildings, Adelaide its parks and churches, and Brisbane its City Hall, opened in 1930. From the 1950s the Gold Coast, which began as a group of small fishing and bathing resorts, began to dominate Australian beach iconography.

Queensland overtook New South Wales, Victoria and Western Australia, all contestants in the battle for the beach. The Gold Coast, known until the late 1950s by the less than inspiring and Brisbane-centric name the ‘Far South Coast’, became the central image of Australian beach culture. High rise, meter maids, sex, souvenirs and holiday makers populated both the imagination and the imagery. With the rise of jet travel in the 1960s the locus of marketing shifted to the airlines, notably Ansett and TAA. Posters produced by graphic designers gave way to photographic imagery with sex as the dominant trope.

Queensland has enjoyed an awkward relationship with others states and Australia as a federated nation. The Queensland brand has been a distinctive force in politics and often a rallying cry against perceived disadvantage and treatment.  On 24 November 2007 Queenslanders awoke on federal election day to an advertisement in the Courier Mail that contained a photograph of local boy and PM aspirant Kevin Rudd with the headline ‘Queenslander’.

Premier Joh Bjelke-Petersen, simply known as Joh, was both a unifying and polarising political force in Queensland. A peanut farmer from Kingaroy, Joh developed a support base in both country and city. Both his supporters and detractors invoked the good name of Queensland to garner support. The Joh era (1968-87) was dominated by an electoral gerrymander, road building, Japanese investment in tourist resorts and golf courses, sand mining, land clearing and huge open cut coal mines. Opponents of overseas interests buying up Queensland’s mineral deposits and tourist sites produced a bumper bar sticker with the slogan ‘See Queensland before Joh sells it’.

The climate’s great for growth

In 2006 just as a serious water shortage engulfed southeast Queensland, the Beattie Government released a new advertising campaign – ‘Come to Queensland: the climate’s great for growth’. The advertisements on television, billboards and in print featured huge humanoid cranes marching across a brown landscape ripe for investment in open-cut mining. The timing couldn’t have been worse. The government had to run a parallel advertising campaign encouraging people to drastically reduce water consumption and install subsidised water tanks.

No longer just selling the state to emigrants, successive state government departments have promoted Queensland to Australian and international investors. The language stays much the same – ‘Land of Opportunity with Unlimited Scope for Industry and Investment’. The periodical ‘Investment Queensland’ had a strong mining focus. The government paid for wharves and ports to aid the export of sugar, coal and other minerals. A strong agricultural industry was based on research and technology. Under the premiership of Peter Beattie these policies were promoted as integral to making Queensland ‘the smart state’. About 20 per cent of Queenslanders adopted that slogan on their number plates, the remainder choosing to retain ‘the sunshine state’.

Nowhere is Queensland branding more apparent than in the heady mix of sports and beer. Recognisable as the reds, the fire, the roar, the firebirds, the maroons, the broncos, the bulls, the lions, the titans, and the cowboys, to name just a few of the exotic sporting species often grouped together as cane toads.

Queensland hosts three of Australia’s greatest tourism brands – the Gold Coast, the Sunshine Coast and The Great Barrier Reef. These branded landscapes have produced successful marketing campaigns. The adoption of the slogan ‘Queensland: Beautiful One Day – Perfect the Next’ into popular discourse ensured the success of that campaign. An image-conscious State government has spent millions on advertising Queensland, especially in the southern press and in target markets, including Japan. But target markets come and go, and Queensland is no longer popular with the Japanese. Travel demand is a complex mix of alternative destinations, economic circumstances and the prevailing exchange rate.

Every region, every city and every major town across Queensland has produced a promotional brochure, and often a web site. Some draw their themes from state and national advertising campaigns, some remain distinctively local. Longreach is ‘The Hub of Queensland’, Carnarvon Gorge appropriates an Indigenous presence, Winton is the home of ‘Waltzing Matilda’, while the outback is where ‘the sands of time’ stand still.

In 2010 Tourism Queensland, the body charged with advertising the state, replaced its ‘Where else but Queensland’ slogan with the global tagline, ‘Queensland – where Australia shines’. Clearly it is still the Sunshine State, though floods and cyclone Yasi early in 2011 caused some residents to wonder where the sunshine had gone. 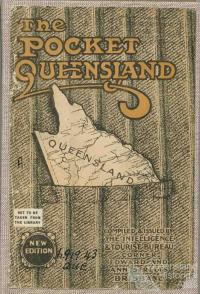 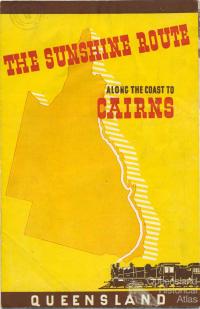 The Sunshine route along the coast to Cairns, 1936 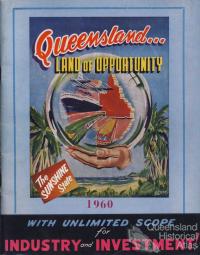 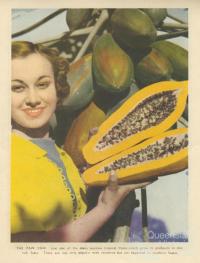 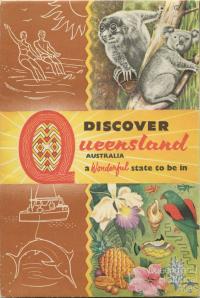 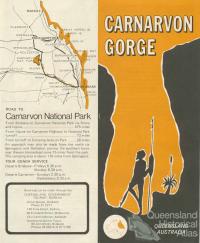 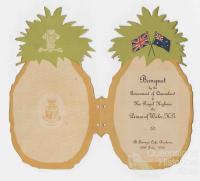 Pineapple invitation, 1920
Neighbours: Asia and the PacificQueensland on a tea-towel