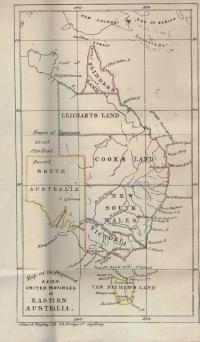 Historical diagrams showing the subdivision of Australia, 1904
By:
Danielle Miller

Queensland is governed from a state capital located a great distance from the majority of its land area. Over the years this has led to a mistrust of and sometimes open dislike of the southeast by Queenslanders living to the north. Indeed, it has been quipped that the Queensland government logo could represent all the State’s resources draining to the southeast.

When a wheelwright makes a wheel, does he put the hub on the rim?  … When an engineer erects a stationary engine, does he not erect it as near as possible to the place where its power is to be exerted? … Yet the people of Queensland have placed their administrative engine, the hub of their Government, in the extreme corner of a territory of 670,000 square miles; and expect that the power of the State will be equally exerted at Bowen and at Brisbane, that the benefits of the State will be equally shown at Ipswich, twenty miles away from the capital, and at Croydon, a thousand miles away.  Is the expectation reasonable? … What would you think of a man who told you the circulation of the blood would be more perfect if the heart were placed in the big toe?

This quote from an 1893 pamphlet titled ‘Why north Queensland wants separation’ clearly articulates one of the key arguments put forward by secession advocates. They argue that Brisbane cannot possibly provide adequate governance for the distant and diverse environments that exist outside of the southeast corner of the State.

For many citizens of smaller nation-states it must be difficult to imagine the vastness of Australia. Indeed, the State of Queensland alone is much larger than many countries. This vastness coupled with the State’s decentralised population represents a significant problem for governance and many of those residing far from the capital city, located in the southeast corner of the state, have given voice to the call for the further division of the territory. The secession debate from the 1850s to today reveals that Queensland’s story is not one that can be told with a single voice. Its geographic distance has resulted in political divisions.

Fighting for a new state

In the wake of the formation of Queensland as a separate colony it was widely believed that further subdivisions would take place. John Dunmore Lang had been integral to the subdivision of New South Wales and he was a strong advocate for continuing the project - a sentiment that many Queenslanders came to support.

Since the establishment of Queensland as a separate colony secession movements have arisen first in northern and then in central Queensland. Before federation secession movements even sent representatives to England to pursue their case. At Federation, the Australian Constitution contained the following provisions,

New States may be admitted or established.

121. The Parliament may admit to the Commonwealth or establish new States, and may upon such admission or establishment make or impose such terms and conditions, including the extent of representation in either House of the Parliament, as it thinks fit ...

Alteration of limits of States.

123. The Parliament of the Commonwealth may, with the consent of the Parliament of a State, and the approval of the majority of the electors of the State voting upon the question, increase, diminish, or otherwise alter the limits of the State, upon such terms and conditions as may be agreed on, and may, with the like consent, make provision respecting the effect and operation of any increase or diminution or alteration of territory in relation to any State affected.

Since federation numerous efforts have been made to push the Queensland Government into action. New state groups have organised conventions and petitions to further their goals. At times they have even been close to achieving their aims.  In 1910 the Queensland Parliament passed a motion proposing that Queensland be divided into three distinct states. However, the motion was never enacted and despite the efforts of many they have never again come so close to success. A lack of political will both in Britain and Brisbane, the existence of anti-secession groups, as well as divisions within new state supporters have all contributed to the retention of a single state.

One goal, many movements

One of the clearest signals of the lack of unity within and between new state pressure groups are the many flags and state name suggestions that have been put forward. However, the most heated debate has been about which city would become the capital of a new state. At various times Townsville, Bowen, Charters Towers, Rockhampton, Sellheim and Cairns have all been suggested and competition between various cities has been a cause of disunity and further inhibited the new states cause. Boundary lines have similarly been a subject of debate - particularly over whether the state should be divided into two states or three. In 2010 it was suggested that the boundary could run along 22° latitude line north of Rockhampton and run through to the Northern Territory.

Since the 1850s secessionists have employed a range of different arguments to further their case, but the general themes of good governance and economics have remained central to the debate. Historically, those in northern and central districts have felt neglected by a distant government. A related longstanding gripe enunciated by secession supporters is that wealth is transferred to the capital instead of being used for the benefit of the area in which it was generated. Independent federal parliamentarian Bob Katter representing Kennedy in the north of the State declared in 2010,

We have been economically massacred in the north ... it’s the tyranny of the majority being in south-each Queensland – the winner takes all.

Proponents hoped and, as Katter’s statement reveals, continue to hope, that the further division of Queensland would lead to enhanced government and bring economic benefits.

While the desire to carve up Queensland may still exist, the actual implementation of the plan is fraught with difficultly. As Hinchinbrook Shire Mayor and new state supporter, Pino Giandomenico, stated in Herbert River Express, 14 August 2010,

It’s one of those issues that can come and go and everyone gets excited, but when we look at the logistics it goes into the too hard basket.

So even though the debate periodically rears its head, just like the abolition of the states altogether, it is unlikely that the new states movements will ever achieve their goal.

John Dunmore Lang, Freedom and independence for the golden lands of Australia: the right of the colonies, and the interest of Britain and of the world, London, Longman, Brown, Green, and Longmans, 1852