When thinking of the great battlefields of World War II it is Stalingrad’s rooftops, London’s skyline and the jungles of Burma that come to mind, not the sleepy 'big country town' of Brisbane. But it was on Brisbane's streets, between 26 and 28 November 1942, that a legendary battle occurred between American and Australian soldiers, fuelled by tension over access to Australian women. As Michael Sturma wrote in 1989, women themselves became ‘disputed territory’ as the latent hostilities of wartime boiled over.

From saviours to unwelcome interlopers

Fears of a Japanese invasion meant that General Douglas MacArthur’s American troops were welcomed on their arrival in Brisbane from early 1942. However a number of factors inflamed tensions between the two Allies.  American servicemen had access to a range of resources outside the grasp of their Australian counterparts. The fact that the 'Battle of Brisbane' centred on the American canteen, located at the corner of Adelaide and Creek Street, highlights one source of conflict. American soldiers were paid more than Australian servicemen and had greater access to luxury goods. To make matters worse, Australian soldiers were not allowed to patronise the American Postal Exchange, or PX, while Americans were able to buy goods at the Australian canteen.

Conflict did not just centre on access to goods, but the impact this differential access was seen to have on relationships between soldiers and the women of Queensland. At the time it was believed that their greater access to material goods was a key factor in the success of Americans with the resident female population. Women’s own accounts, however, reveal that they were often attracted to American servicemen for other reasons, notably their often apparent genuine fondness for women. Even the official war historian, Gavin Long, notes (although not in an entirely critical way): ‘Australians have always treated their women a little worse than their dogs.  Therefore the Americans who have usually been taught to respect women and have displayed some tenderness towards Australian women, have stolen most of the pretty girls.’  Long’s use of the word ‘stolen’ reinforces the view that women were seen as property – a situation that set the scene for conflict.

It did not take long for concern to arise over the relationship between Australian women and American soldiers. In the first month after the arrival of the American forces newspaper articles began appearing questioning the behaviour of women fraternising with the newcomers. Such concern spread to Australian servicemen and was even used by the Japanese in their propaganda to undermine the morale of soldiers serving in Papua New Guinea.  One Australian solider serving overseas stated in a letter to his wife ‘We know what’s going on in Australia, the Americans have got all the women’. As the implicit anger in this statement suggests, many Australian men felt aggrieved by the popularity of the Americans.

The Battle of Brisbane

Matters erupted into violence in the late afternoon of November 26, the American holiday of Thanksgiving. There had been earlier brawls in Albert Street, but as evening came on a trivial and isolated argument spiralled out of control, exacerbated by alcohol consumption. The opening clash broke out at the Australian canteen in Adelaide Street, after Australian soldiers, including decorated soldier, Gunner Edward Webster became involved in a dispute with an American and the American military police (MPs) stepped in. The Australians then sided with the soldier against the police as the argument turned physical. An Australian was hit by a baton and the American MPs were chased down Adelaide Street towards the PX.

With the military police barricaded inside the PX and calling for assistance, the situation escalated and at its peak involved several thousand Australians. Rocks and bricks were used as weapons, and during the melee Webster was killed by a shotgun fired by a military Private J. Grant, as the two fought for control of the weapon. Webster was not the only casualty. By the end of Thanksgiving night, seven other Australians had suffered buckshot wounds and at a minimum nine American soldiers, including Grant, were also hurt, one with a fractured skull. The incident was followed by a second wave of attacks on individual Americans, when 'Yanks' in the company of local women found themselves targets for attack, set upon and beaten by gangs of Australian servicemen.

Even though the initial riot broke out over the behaviour of American military police, there were deeper sources of tension fuelling the violence. The 'Battle of Brisbane', a legendary moment of drama on Queensland's World War II home front, was fuelled by competition for the attention of Australian women and the anger many Australian men felt at the American incursion into ‘their’ territory.

Michael Sturma, ‘Loving the alien: the underside of relations between American servicemen and Australian women in Queensland, 1942-1945’, Journal of Australian studies, 13, 1989

Peter A. Thompson and Robert Macklin, The Battle of Brisbane: Australians and the Yanks at war, Sydney, ABC Books, 2000 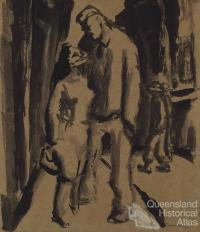 Woman and soldier (Pick up), 1942
A tale of two elections – One Nation and political protestDangerous spaces - youth politics in Brisbane, 1960s-70s