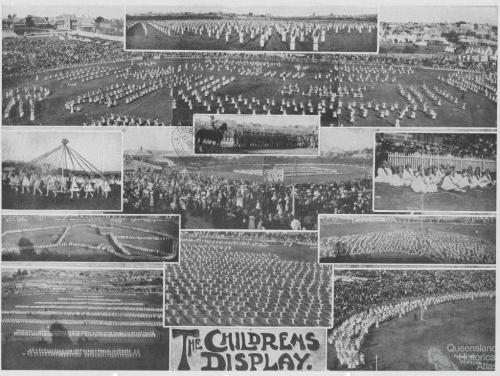 The Jubilee show of 1909 celebrated fifty years since Queensland’s separation from New South Wales. Organisers declared that ‘We intend to show our own people what is being done within and without the State, and we desire to demonstrate to our Sister States and to New Zealand what wealth lies in our fertile soil, in our ore and coal deposits, and in our forests’. In the main ring, the Children’s Display involved 1200 girls performing callisthenics followed by 1500 boys who provided a display of physical drill. The children then created a ‘living map’ of Australia, the boys providing the country’s outline and state borders and the girls colouring in the states: Queensland was maroon, New South Wales blue, Victoria gold, South Australia green and Western Australia pink. There was no mention of Tasmania. Queenslander, 21 August 1909, State Library of Queensland