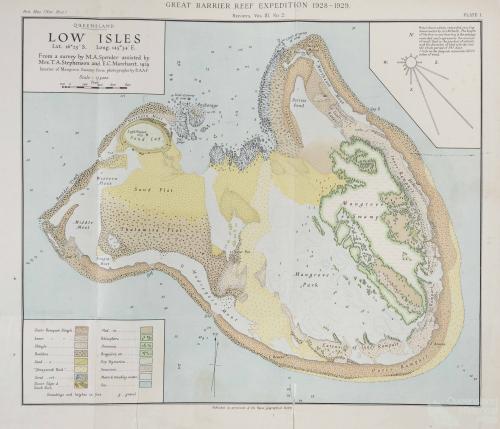 Map of Low Isles, 1929. From a survey by M.A. Spender assisted by Mrs T.A. Stephenson and E.C. Marchant, interior of mangrove swamp from photographs by RAAF. Great Barrier Reef Expedition 1928-29, Reports, Volume III, Number 2. Collection of the University of Queensland

The Low Isles party had prior knowledge of many reef species from existing biological collections and taxonomies. The focus of the expedition thus turned to more curious questions about population sizes, reproduction and growth. The scientific research at Low Isles was stratified according to environmental zones and scientific method, it comprised a boat party, a shore party and a physiological or experimental party. According to Charles Yonge, ‘First of all we examined our own reef and its population, then we experimented upon, and observed the habits of, the animals and plants, and finally, equipped with the knowledge thus gained, we journeyed further afield up and down the Barrier, able to take the fullest advantage of short visits to other islands and reefs’.

One of the key findings about coral growth rates was made possible by Saville-Kent’s detailed and accurate recordings more than two decades earlier. Members of the British Expedition relocated the individual corals recorded by Saville-Kent and re-measured them to calculate annual growth.